Questions and Answers, Q&A – Part One

In 1955 Ba’ba’ established the spiritual mission and organization of Ananda Marga as its founding Guru, President and Purodha Pramukha. Ananda Marga Pracaraka Samgha is Ba’ba’s organization. He appointed the first General Secretary and all subsequent General Secretaries until His physical departure from this earth in 1990. He gave instructions that continue to guide Ananda Marga since that time. Some of those instructions provide that the organization continue the positions of President and Purodha Pramukha, with successors selected and elected accordingly. However, He told us that He will always be the Marga Guru. This means that Ananda Marga will always be His organization. He even mentioned on more than one occasion that the organization is His physical body.

The Guru and disciple relationship is one involving devotion and service. It is not for us as Ananda Margiis to determine or undermine the authorities and structures that Ba’ba’ provided. Rather it is for Margiis to improve upon the work He wished for, expected from us and instructed us to do. We as Margiis need to first follow the guidelines of the organization that Baba gave in Carya’carya, various organizational rules and procedures, and all of the conduct rules in order to improve our personal and organizational lives. Only through these ideological steps will we be able to move forward in a united way and truly satisfy Ba’ba’. Such unity alone can sustain Ananda Marga, deserving the favor and the Grace of Guru.

In January 2006, the Board of Directors of Ananda Marga, Inc. illegally changed the By-Laws of the corporation in a way that gave the Board of Directors the right to reject any authorized Sectorial Secretary in New York Sector after the appointment by the General Secretary of Ananda Marga Pracaraka Samgha Central Office (AMPS Central) in Ranchi, India — the parent body of the religious organization. The purported changes to the Bylaws were done without consultation with, or approval from AMPS Central. A short time later, Ac. Vimalananda Avt. was appointed as the official Sectorial Secretary by the General Secretary of AMPS. Subsequently, the same Board of Directors refused to accept the appointment.

2. What harm is being done through the purported changes to the By-Laws of Ananda Marga, Inc?

The unauthorized changes to the By-Laws of Ananda Marga, Inc. cause harm to the members and structure of the organization by:

3. What is the relationship between Ananda Marga, Inc., in the USA, and Ananda Marga Pracaraka Samgha (AMPS), globally?

Ananda Marga, Inc. is affiliated with its parent organization, Ananda Marga Pracaraka Samgha, a global religious hierarchical organization with Central Office in India. In order for AMPS Central to operate in the United States, as in any other country, it requires a legal formation recognized by the government. The corporate entity of Ananda Marga, Inc. was created for this purpose and complies with the laws of the country. But as a religious organization and a sectorial or national entity, Ananda Marga, Inc. is governed by the AMPS internal rules and procedures established through the legacy of its many years of operation under the direct administration of its Founder, Rev. Marga Guru, Shrii Shrii Anandamurti ji. The direct supervision continued until His last breath. It will continue indefinitely, indirectly, through the legacy.

Attempts to change the organizational functioning of Ananda Marga, Inc. through any means, not authorized by AMPS Central, violates AMPS religious codes and procedures — the Guru’s mandate.

It should be remembered that all Whole-timer Sannyasin are created, trained, certified and given assignments by AMPS Central alone and as such they are required to obey and follow the policies and procedures as established by the founder and preceptor.

4. What happened in New York Sector of AMPS in the years following the purported changes to the By-laws of Ananda Marga, Inc. in 2006?

The true Sectorial Secretary, Ac. Vimalananda Avt., and numerous representatives of AMPS Central visiting on inspection tours, attempted to work with the former Sectorial Secretary and the other Whole-time workers posted in the sector. During the three-plus years since the illegal amendments were purportly enacted, Ac. Vimalananda Avt. and these representatives attempted to educate members of Ananda Marga about the facts and the issues, amicably resolve differences, and restore the proper relationship of Ananda Marga, Inc. with AMPS Central. These efforts took the form of many formal and informal events, special joint Sectorial whole-time worker meetings (RDS), and other ad-hoc meetings, above and beyond the collectively-held programs that have been the tradition of Ananda Marga in the USA and the New York Sector for many decades.

Hundreds of hours of discussions, meetings and various other sincere efforts to communicate, comprising thousands of people-hours took place over these years. No one was idle or passive in responding to the crisis as it was developing, particularly the rightful Sectorial Secretary.

5. How has Dada Vimalananda kept the Margiis informed about the situation?

Dada Vimalananda has been educating the Margiis about the truth of the situation via email, web-site postings, many telephone and in-person conversations, and, as well with the development of a team of senior, respected Margiis who are familiar with the facts and properly educated on the issues. Since the task is huge and as the former Sectorial Secretary and former Board of Directors have been spreading misinformation, perpetuating half-truths and myths in order to create more confusion, this has not been a simple and easy task. The difficulty has been accentuated by a scarcity of resources available in the absence of any charge handover from the former Sectorial Secretary.

Dada Vimalananda maintained a low profile out of respect for the AMPS religious and organizational structure involving the Whole-timer Sannyasins, and the desire not to contribute to any further polarization of the General Margii followers/members.

Since the renegade Whole-timers, including the insubordinate former Sectorial Secretary, have involved many Margii followers/members and polarized most of them, the General Secretary instructed Dada Vimalananda to address the situation directly.

Dada Vimalananda’s communications will continue along with the issuance of informational materials such as this list of Questions and Answers. Dada has arranged the creation of a web site specifically meant to educate everyone about the issues, solicit unanswered questions, untangle the web of misinformation and misunderstandings, disarm the antagonists, and provide regular updates. Please visit https://www.ampsnys.org/communications and https://www.ampsnys.org/communications/docs for more information. If you wish to be on an information email list for the purpose, please inform Dada Vimalananda at his email address, ssnysector@gmail.com . He has also created an interactive blog to help the growth and development of Ananda Marga in New York Sector at http://anandaparivara.vimalananda.org.

6. Why and how did Dada Vimalananda dismiss the now ousted members of the Board of Directors of Ananda Marga, Inc. and form a new board?

Dada Vimalananda, as the duly posted Sectorial Secretary of New York Sector, created a new Board of Directors and had a lawyer send a letter on his behalf to all the replaced members of the Board of Directors as notice that they were removed from the board. The letter also requested that they turn over control of all the assets of the corporation to the newly constituted Board of Directors in accordance with the instructions of the General Secretary and rules and practices of AMPS Central.

The insubordinate Sectorial Secretary had continually violated structural discipline by failing to attend World RDS in India, to send reports, to cooperate with inspections held by AMPS Central representatives and to maintain any communications with the AMPS Central Office in Ranchi, India for an extended period of time. Efforts by AMPS Central were made to bridge this gap, with no success. The General Secretary has the right, acknowledged in the By-laws of Ananda Marga, Inc., to appoint a new Sectorial Secretary who then may dismiss and appoint new board members at his discretion for the welfare and security of the organization. The letter sent to the ousted board was done according to this procedure.

7. What was the response of the removed Board of Directors to the letter advising them of their dismissal?

The ousted Board of Directors responded to the letter with a lawsuit against the official Sectorial Secretary and the authorized Board of Directors to prevent them from acting as such. Details of the lawsuit may be found at https://www.ampsnys.org/communications. This lawsuit was initiated without first attempting to negotiate with or the discuss the matter with the rightful Sectorial Secretary, Dada Vimalananda.

The lawsuit requested the court to intervene in the religious affairs of Ananda Marga, Inc. However, constitutionally, the government and courts have no jurisdiction to regulate the affairs of religious organizations.

Extract from the U.S. Constitution, 1st Amendment.
“Congress shall make no law respecting an establishment of religion or prohibiting the free exercise thereof…”

The Margiis will be helped by the reestablishment of a strong organizational structure that will demand, support and maintain the discipline of the Whole-timer Sannyasin workers. The Margii community has become divided by disputes among the Whole-timers arising from the weakened organizational structure. When this structure is allowed to function properly, the Margiis will move together in a natural way in the absence of current elements pulling them apart and polarizing them.

Ananda Marga, AMPS, has two component entities in one institution. The “structure” is composed exclusively of Whole-timer Sannyasin, who hold structural and supervisory positions from General Secretary, to Sectorial Secretary, to Regional Secretary, onwards to lower levels; as well as other departmental and similar posts at the various levels.

The second component is the “organization” composed of all General Margiis who occupy positions of Bhukti Pradhana, on the Bhukti Committee, Unit Secretary, on the Unit Committee, and as members of working boards and advisory committees in support of the structural Whole-timer supervisors at each of the levels. Except for the advisory committees, all the positions are selecto-elective with General Margiis empowered on the Bhukti and Upabhukti level, and empowered to some extent on the ACBs where the control is with the respective Whole-timer Secretaries.

The seeds of crisis came when some Margiis became or were involved in aspects of the “structure” and, at times, the personal-life-related issues of Sannyasin; areas which are beyond their jurisdiction. Even in a secular organization or a commercial company… personnel issues are entirely private and out of bounds for public discussion and disclosure.

Likewise, Sannyasins should not interfere in or involve themselves in certain aspects of the Margiis lives, including the elections of Bhukti Pradhana and Upabhukti Pramukha, except as prescribed in election guidelines — to identify/qualify the candidate nominees and the electoral body. 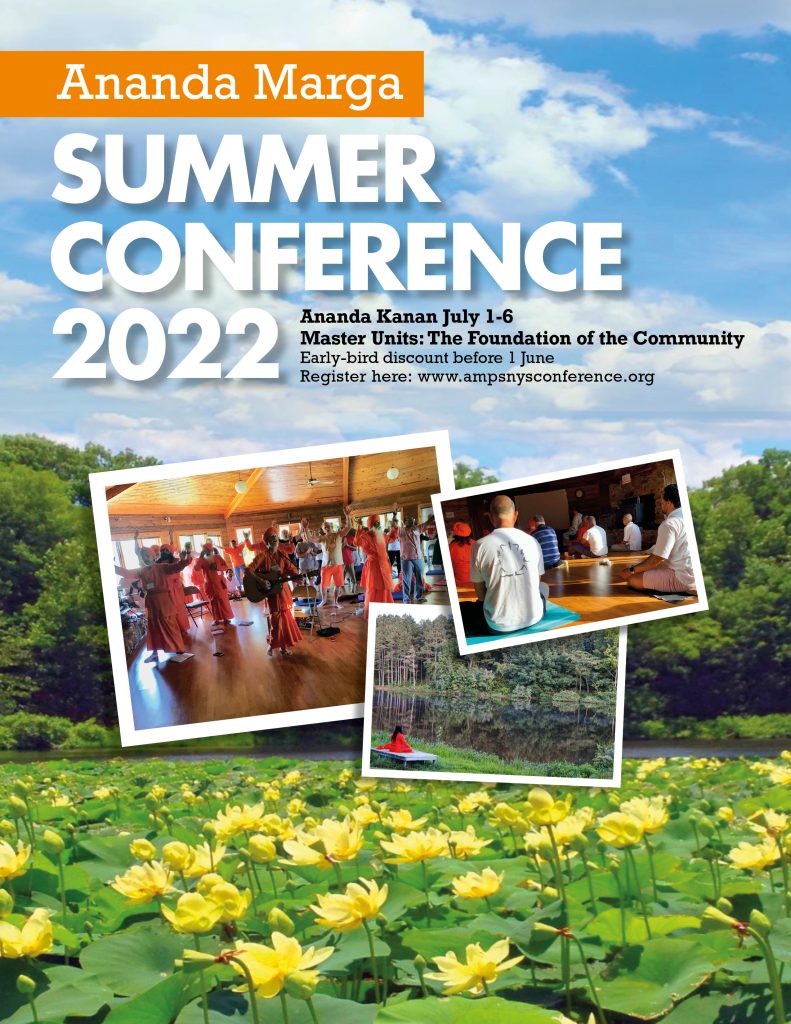